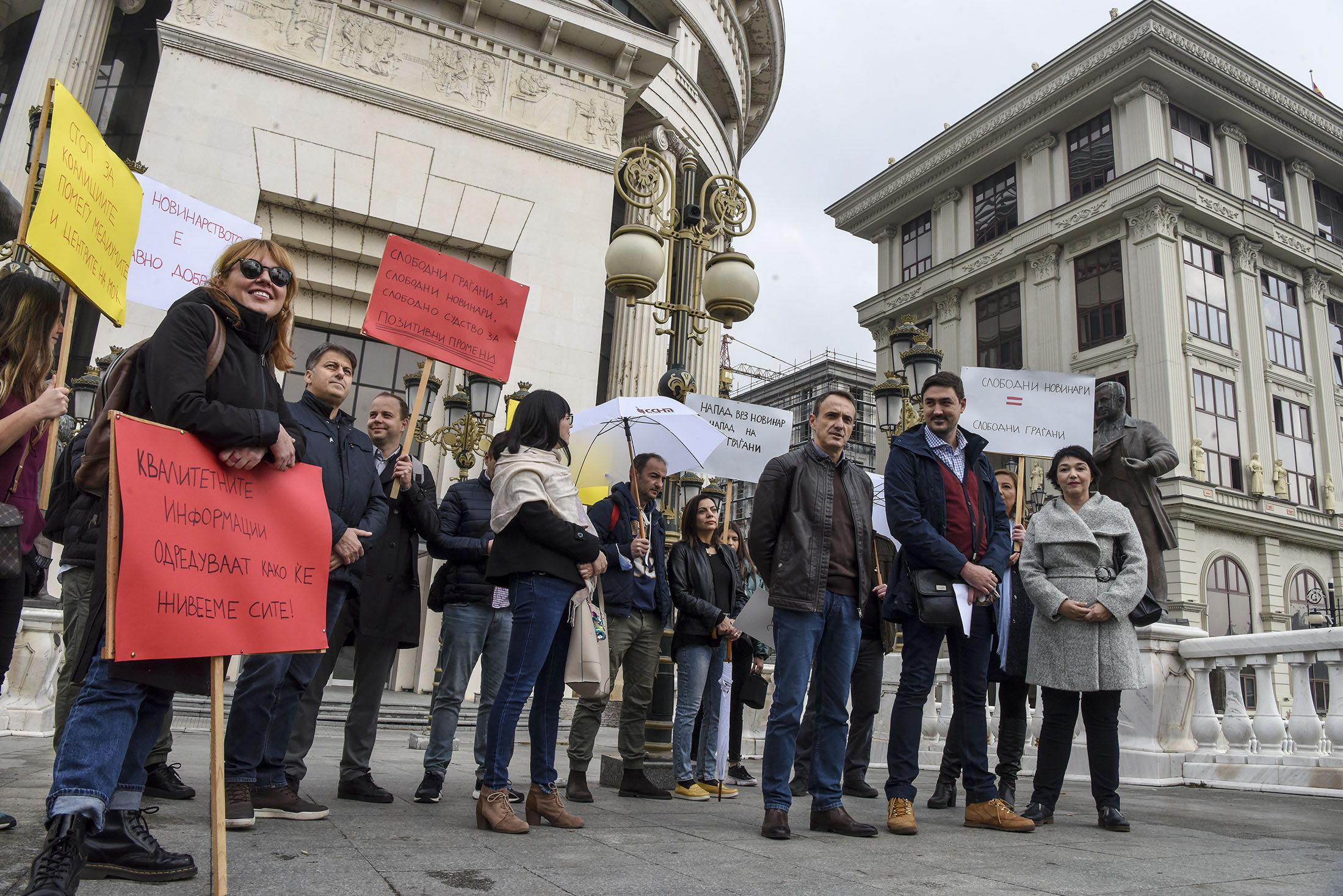 April 27 2017, is a symbol of impunity for attacks on journalists, remembered as Black Thursday for journalists in Macedonia, who were injured during the intrusion into the Parliament of the RNM.

That is the reason why today, on November 2, on the “International Day to End Impunity for Crimes Against Journalists”, in front of the Basic Public Prosecutor’s Office the Association of Journalists of Macedonia (AJM) and the Independent Trade Union of Journalists and Media Workers (SSNM) organized a press conference. Mladen Chadikovski, President of AJM, Pavle Belovski, President of SSNM and the journalist Dushica Mrgja addressed in front of their colleagues.

The President of AJM, Mladen Chadikovski reminded on the violence against journalists, photojournalists and camera operators, citizens, but also the constitution that happened that day: “Today we are here to express our protest, in the middle of another political drama, but time is to address the real crisis that lasts and marks our three decades of survival… It is not political, it is a crisis of justice, it is a crisis of the justice system, which has always been an instrument to prevent or encourage new social trauma.

Moreover, what we received from April 27 – we received another message that we were prevented from doing our job, as the citizens deserve. In addition, we are not here to ask for solidarity from the citizens, but we are aware that this is our common problem, the journalists and as well as the public that we have to serve. Substantial social change cannot take place if the judiciary and the media are not free from politics, nor can we serve the citizens with dignity. That is why this is everyone’s duty and that is why we insist on justice. Justice for April 27th both for us and for those we represent and for whom we exist – the citizens,” said Chadikovski.

The President of SSNM, Pavle Belovski, also addressed the gathering and said, “Since the events of April 27, the MPs have received justice, and justice for the journalists failed. AJM and SSNM as partner organizations did not step back, but for more than 5 years we were working on the idea of how to end the violence against journalists through a legal solution. However, to talk about what would be our benefits from the legal changes in the Criminal Code, let us go back a bit. Exactly 5 years and a week passed, as our media team and I were attacked and it resonated in public. A year later, the A1 journalists’ team was attacked on Macedonia Square. We were in a political crisis and the citizens saw us as a target to send a message, unfortunately, a message with fists.

That is why AJM and SSNM did not hesitate and initiated changes in the Criminal Code with which the idea was to end the attacks on journalists, i.e., to sanction the attacks as attacks on an official representative. Even today, after 5 years, we cannot say that we have such a case processed because the law is still in Assembly and has not been adopted yet.”

Journalist Dusica Mrgja stressed not to forget April 27, Black Thursday where journalists were attacked from all sides:

“Four and half years ago, I was the first journalist to testify here at the Public Prosecutor’s Office. 4.5 years later, the assailant in the Assembly is not even identified, let alone initiated procedure for him. In contrast, the assailants on politicians were convicted, with effective or not effective judgment, some had their sentences reduced, and some were amnestied according to the political calculations that were done. To make the absurd even bigger, we initiated our own lawsuits, with the support from AJM and the media associations. Moreover, look at the irony in Macedonia – the judges disparage us, they insulted even some of their colleagues, they denied their rights and asked if they were journalists at all, and everyone asked us what we were doing in the Assembly on April 27.

I want to answer them, I hope on behalf of all the colleagues who were on the bloody Thursday in the Legislative House on April 27 and in that infamous press centre, if they forgot what they were watching on TV, we were the ones reporting, our teams sent recordings and reports. On April 27 in the Assembly, the journalists saved the country. I responsibly claim that if we had not been as loud as we were, with all the terror we faced, April 27 would have ended much worse with casualties. That is why April 27th and Bloody Thursday must not be forgotten – there must be justice for journalists!”

AJM and SSNM call on the institutions seriously and effectively to investigate all attacks on journalists and punish responsible ones. Without such a responsible attitude of the institutions, the attacks will continue and become more aggressive, and this may jeopardize the lives of journalists. Institutions need to understand that an attack on a journalist is at the same time, an attack on freedom of speech, the right of citizens to be informed and democracy in general.

This event of AJM and SSNM was part of the global campaign to combat impunity for attacks on media workers organized by the International Federation of Journalists.

EC report: Journalists are increasingly attacked and exposed to self-censorship, the media are financially unsustainable and MRT has the lowest budget in 10 years