The Association of Journalists of Macedonia (AJM) and the Independent Trade Union of Journalists and Media Workers (SSNM) strongly react to the treatment and censorship of the media, journalists, and photo reporters at yesterday’s Economic Forum organized by the Prime Minister’s Office in coordination with the Prime Minister of Albania and the President of Serbia at which promoted the “Open Balkans” between North Macedonia, Albania and Serbia.

AJM and SSNM received complaints from journalists and photo reporters yesterday that they were not provided with appropriate working conditions on the Forum, so some of them were made by the organizer from the seats where they were sitting. However, they were initially told that they were intended for them, with the reference “To cope” for a place. This made it especially difficult for the TV journalists in the work process because they were away from the cameramen and in contact with them while performing their work tasks.

In addition, the photo reporters, apart from being restricted in their movement, were not provided with a place for their equipment and sent the materials to the newsrooms, so some of them transferred materials, and they worked kneeling or sitting on the floor.

AJM and SSNM react to the information that at the press conference, the journalists were told that they would not have the opportunity to ask a question, except for three state-owned media for which at the level of the organizers’ offices it was previously agreed to ask a question – one media the three countries represented at the Forum – RT Albania, the Tanjug agency and the MIA agency. With this, the possibility of asking nine questions was foreseen and agreed upon; all nine were asked by these three media, without the chance of another press to ask a question.

This attitude of the organizers, in addition to putting the media in an unequal position and discriminating based on media ownership, also introduces the practice of selecting suitable and ineligible media for asking questions at the cabinet-level and stifling freedom of expression by disabling more different media to ask more questions at a press conference, especially since there was an opportunity for such a thing yesterday, nine times. AJM and SSNM encourage their members and other media workers if in the future their right to report is prevented from organizing and leaving the event. The right to information is a guaranteed right and duty of the media and responsibility of the organizers of circumstances of public interest to provide appropriate conditions for media workers.

AJM and KAS: training for young journalists - a chance for a new era in media based on integrity and courage

The safety of journalists, photographers and cameramen in public protests must be guaranteed 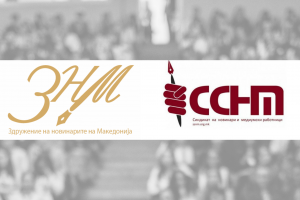 AJM and SSNM: Condemnation for Jakimovski’s disparaging and inappropriate attitude towards journalists 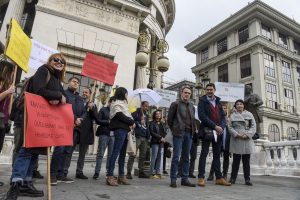