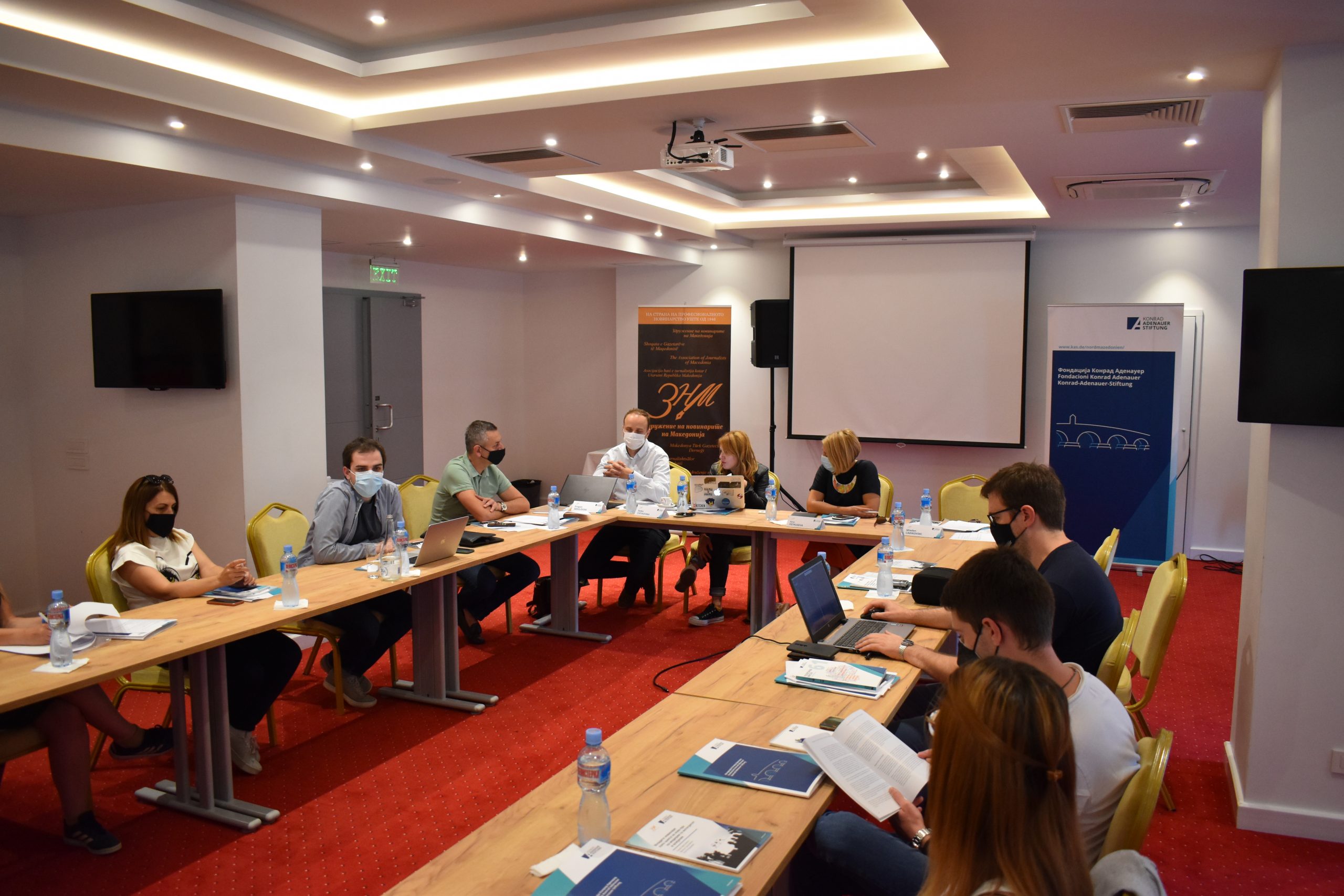 The Association of Journalists of Macedonia (AJM), with the support of the Konrad Adenauer Foundation (KAS), organized a three-day workshop “Young Journalists as a Chance for a New Era of Media with Integrity and Influence”.

In the first part of the three-day workshop, the President of the Association of Journalists of Macedonia (AJM), Mladen Chadikovski, addressed the audience, emphasizing the importance of the role of young journalists in advancing the standards of the guild in the country. “By building the capacities and improving the working conditions in the newsrooms as well as improving the cooperation of young journalists with their more experienced colleagues in the newsrooms, the strategic goal of AJM for more active involvement of young people in creating a professional environment for journalists’ work is confirmed.” – Chadikovski emphasized.

AJM Executive Director Dragan Sekulovski also addressed the audience and presented the new publication that was prepared in the past, entitled “Young journalists as a chance for a new era of media with integrity and influence” (the publication is available in Macedonian and Albanian languages).

Sashka Cvetkovska from IRL led the session on Research Stories and Innovation in Presentation – From Zero to Product: The IRL / OCCRP Concept. She spoke before her young colleagues about the IRL’s practices in advanced reporting and the standards of the Organized Crime and Corruption Reporting Project – OCCRP, as well as the latest topics covered by the editorial board related to high level corruption and abuse of power.

The journalist, Ana Petrusheva shared her experiences from her long-term work in journalism, pointing out the problems and challenges that journalists and media workers have faced and still face. “In this context, there are fewer and fewer young journalists, and many newsrooms face a severe problem in finding journalists. Therefore, this type of training is important for young journalists to get not only the opportunity to hear experiences from other media and a historical overview of how things have changed, but also about professional standards and red lines in the profession” – said the journalist, Ana Petrusheva.

In the second part of the workshop on the topic “Creating an infrastructure for analytical skills and research techniques and data collection; research organization – Meet Aleph” guest speakers David Ilievski researcher and producer at IRL and Luka Blazhev, graphic designer at IRL had presentations before the participants.

In the third part of the workshop, journalist Srekjko Popovski in his presentation emphasized that such workshops contribute young journalists to understand the differences between the so-called ordinary and in-depth journalism. “They have the opportunity to get acquainted with the research tools available to them and the manners in which they are used, as well as standards and principles that should be observed in the preparation of such topics. What is especially important is that they have the opportunity to understand that the focus of their work is not them, but the topic they are working on,” said journalist Srekjko Popovski.

The three-day workshop from July 22 to 24 in Ohrid was attended by journalists from several newsrooms, covering both traditional and new media. During the workshop, experiences on the development of journalism were shared, as well as the problems and challenges in the journalistic profession. The three-day workshop ended with initiative to set up a section of young journalists within the Association of Journalists of Macedonia (AJM) for which more activities will follow in September.