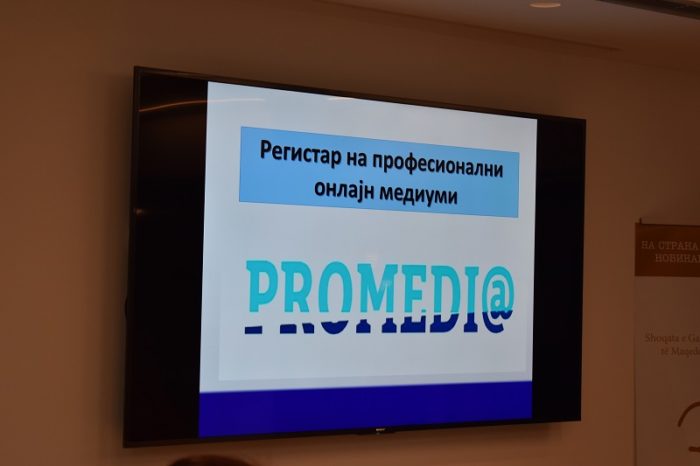 The Association of Journalists of Macedonia (AJM) and the Council of Media Ethics of Macedonia (CMEM) inform that the web site www.promedia.mk which contains data for the professional online media is now available and accessible to the public. The Register is currently comprised of 101 online media that publish content in multiple languages.

We remind that the main criteria that online media must meet to become part of the Registry are: transparent ownership, published impression (editor, editorial office), respect the standards of the Code of Journalists, the Charter of Ethical Reporting during Elections and the Statute of CMEM. Also, published texts should be signed by the author and if are taken over by other media, should be stated in accordance with the Copyright Law.

The main purpose of creating this Registry is to contribute to the process of professionalization in the operation of online media, thereby enhancing their credibility as well as recognizing those who uphold standards in compare to unethical media that cause damage to the reputation of professional online media.

The process of creating the Registry was conducted following the criteria agreed between CMEM and AJM following examples from the practice of developed democratic societies and the Council of Europe, while consulting the media and business community in the country as well. In addition, the process of self-regulation was supported by the Economic Chamber of Macedonia, which urged its members to advertise only in online media that are part of the Registry. The process was welcomed by the EU Delegation to Skopje, the OSCE Office in Vienna, the US Embassy in Skopje, and the European Federation of Journalists.

Media self-regulation continues to be a common commitment of our organizations to voluntarily establish criteria and adhere to them within a process that is open to the public. Therefore, we remind that the membership in the Online Media Register is changeable and is a process that is constantly evolving. This means that media outlets that are not currently part of the Registry and comply with the membership requirements will be able to join in, while those that are already part of the Registry and fail to comply with the membership criteria and do not respect ethical rules will lose their status of active members.

AJM: Condemnation of threats and insults on journalist Miroslava Byrns