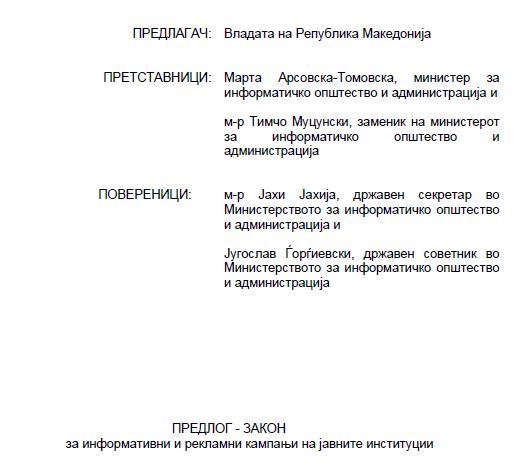 The Association of Journalists of Macedonia, today sent a letter to the guarantees of Przino agreement, the ambassadors of the US and the EU Delegation in Skopje, Jess Baily and Aivo Orav, expressing concern about the government adopted draft law on government advertising.

The letter notes that the law legalizes and expands current corrupt relationship between the authorities and the media. Thus, the government will strengthen the control over the media and would restrict the right of citizens to be informed.

Published wiretapped conversations unequivocally reaffirm the links between government advertising and the direct involvement of government officials in the media, the letter said.

The advertising campaigns have no public interest but are nothing more than political propaganda of VMRO-DPMNE, through which they promote their own ideology and political program. The Minister of Information Society and Administration Marta Tomovska in the briefing with representatives of journalists and media said herself that the advertising campaigns are there to give opportunity to the government to address to its electorate.

AJM reminds the ambassadors that instead of government advertising campaigns AJM stands for subsidizing the media. The money from the campaigns to be used for the production of media content that will serve the public interest, to increase political pluralism in the media, support for minority media, reinforcing the correspondent network of the media, training for journalists and other activities.

AJM has left the briefing of Minister Tomovska

Government advertising will legalize corruption in the media