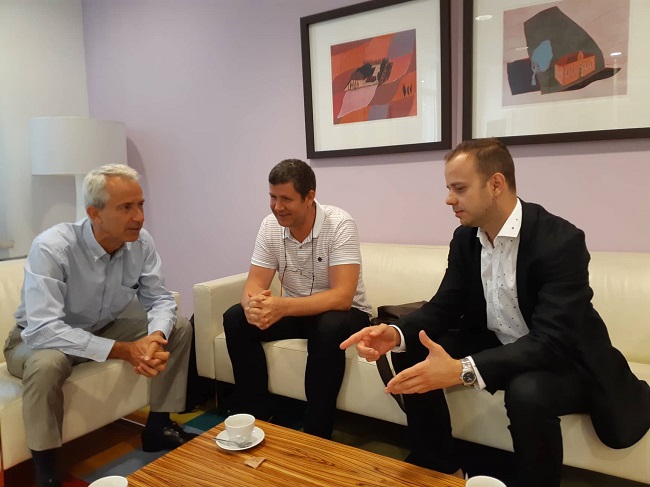 Representatives of the Association of Journalists of Macedonia today and yesterday had meetings with diplomats that have accreditation in Skopje. The President of AJM Naser Selmani and the Executive Director Dragan Sekulovski, had separate meetings with the French Ambassador Christian Thimonier, the Dutch Ambassador in Macedonia, Wouter Plomp, the Deputy Ambassador of the Delegation of the European Union in Skopje, Lukas Holub, US Embassy in Skopje political adviser Paul Graden.

At the meetings, the President of AJM expressed great concern about the recent amendments to the Election Code for the legalization of political propaganda in the media with public money and the indirect regulation of the online media, which could have a negative effect on the freedom of the media.

Selmani explained to the interlocutors that the government and the opposition want to make political propaganda in the media during the election campaign and with that to restore the old corruptive system between politics and media owners like in the regime of Gruevski. He thinks that the money that media will receive from the political parties for publishing political propaganda will make the media financially dependent, and that will affect their editorial policy.
He urged diplomats to put pressure on the government and after the referendum to withdraw the possibility of using public money for political propaganda and also to remove the possibility for the State Election Commission to register and punish online media during the election campaign or referendums.

The representatives of AJM also discussed with the diplomats about the inefficiency of the Public Prosecution and the Court to quickly and efficiently process attacks against journalists. In addition, they believe that the public calls by government officials to the management of Macedonian Radio Television to resign are counterproductive and do not contribute to the reform of the public service.

EFJ supports AJM regarding the changes in the Electoral Code

A workshop was held on: "New Trends of Hate Speech in Media and Plagiarism in Journalism"